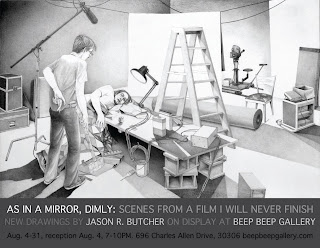 I’ve posted a few snippets to soundcloud this afternoon. All stem from explorations of a small number of modules –

The death of Mike Kelley is a huge bummer.

A short piece, the first I’ve posted in quite some time.
I’ve added a 140 to my system, and had some fun with it here in conjunction with the 281 and 266. I’m fond of the ping-pong duophony of the 266, and the minor illusion of delay here.

I’ll be focusing my attention on a series of drawings over the next few months, but will try to post with more frequency my less frequent studies on the 200.

Derek Holzer has put together an impressive essay on artists experimenting with electronics for edition 19 of Vague Terrain entitled Schematic as Score, and kindly included me among them. Framing it as he does with his own work reinterpreting Tudor’s Rainforest, the article is an inspired merging of concepts, visuals, and audio results. The article includes work by:

My entry includes remarks on Self-Playing process, and the audio recording of the “For Loud Speakers” patch diagram seen here (partially):

I recommend browsing through previous Vague Terrain journals as well – as they are all quite interesting.

I cannot believe it has been so long since my last post.
Changes in work and living situations (all for the best), have distracted me a bit from this purpose. I present now, a few sketches from the past few months.

I added an Infinite Phase Shifter model 297 to my system recently and these recordings are all experiments intended to familiarize myself with its behavior. Particularly satisfying to me among this batch are Crackling Line and Dry Pine Sap Line, which are both Self-Playing experiments using only the Infinite Phase Shifter, Complex Waveform Generator, and the Source of Uncertainty. I suggest listening to them at relatively high volume through speakers in a nearly empty room after imbibing an entire bottle of artificial smoke flavoring.

Watered Path required most of the system, the 297 included in order to manipulate feedback, and is not a Self-Playing Patch.

Driving Conversation, also served as a test of the extreme times available through external control of the 281’s Attack and Decay stages. The actual piece takes a very long time to decay completely to silence.

I hope enjoyment is the result upon listening.

As promised, images from the “Restless Devices” show with Joe Tsambiras currently running through Dec 5th at Beep Beep Gallery, for those not proximal enough to visit.

A recording of the patch what was on playing throughout the gallery the night of the opening:

Stills from the animations – with backgrounds based on pages of Cornelius Cardew’s Treatise.

And here are the images I used for the fascia of various sound players, featuring recordings and experiments on the Series 200:

And one of the non-sound player noodle images:

For your enjoyment (?), a few recent recordings and details of two images for the upcoming show at Beep Beep Gallery (see previous post).

10.17.2010.2.SPP – A short recording of a self-playing patch (noodle) from this past weekend. Intended to be listened to at high level, the end of silence marks the moment I turn the system on: